Fear Mongering at the good,grey Times! Almost Marx shares the essentials of ‘Corbygeddon’ 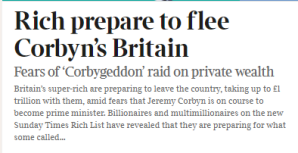