Andy Divine on Adorno and Horkheimer. Political Observer on the ‘Victimhood of Andy’

The third paragraph of Andy’s farewell letter, after the politic gestures, is an exercise of blame placing, at its most intellectually bloated: ‘A critical mass’!

‘What has happened, I think, is relatively simple: A critical mass of the staff and management at New York Magazine and Vox Media no longer want to associate with me, and, in a time of ever tightening budgets, I’m a luxury item they don’t want to afford. And that’s entirely their prerogative. They seem to believe, and this is increasingly the orthodoxy in mainstream media, that any writer not actively committed to critical theory in questions of race, gender, sexual orientation, and gender identity is actively, physically harming co-workers merely by existing in the same virtual space. Actually attacking, and even mocking, critical theory’s ideas and methods, as I have done continually in this space, is therefore out of sync with the values of Vox Media. That, to the best of my understanding, is why I’m out of here.

The work of Horkheimer and Adorno has been the hysterical focus of Conservatives, the most recent by Reactionary Guru Jordan Peterson. And his use of the catch phrase of ‘Marxist Post-Modernism’, as the enemy of the respectable bourgeoisie, and their attempts at intellectual/political climbing.

An antidote to this attack, on Adorno, and his political ally Horkheimer, is to read Theodor W. Adorno: One Last Genius by Detlev Claussen, that presents a picture that is at odds with Sullivan’s polemic. 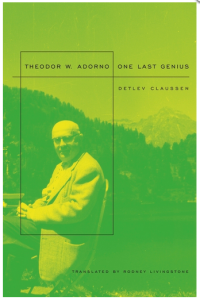 I’ll end my commentary at this paragraph, where Mr. Sullivan presents himself as ‘a voice of  political reason’, instead of another of a collective of thinkers, writers, self-publicists who are part of a collective of Neo-Conservatives and Neo-Liberals, that can more than accurately be called The Midwives of Trump. Note that the enemy identified by Sullivan are ‘students’! Recall Allen Bloom, and his natural inheritors, in the political present, of Lukianoff & Haidt?

Two years ago, I wrote that we all live on campus now. That is an understatement. In academia, a tiny fraction of professors and administrators have not yet bent the knee to the woke program — and those few left are being purged. The latest study of Harvard University faculty, for example, finds that only 1.46 percent call themselves conservative. But that’s probably higher than the proportion of journalists who call themselves conservative at the New York Times or CNN or New York Magazine. And maybe it’s worth pointing out that “conservative” in my case means that I have passionately opposed Donald J. Trump and pioneered marriage equality, that I support legalized drugs, criminal-justice reform, more redistribution of wealth, aggressive action against climate change, police reform, a realist foreign policy, and laws to protect transgender people from discrimination. I was one of the first journalists in established media to come out. I was a major and early supporter of Barack Obama. I intend to vote for Biden in November.