Posted on February 21, 2020 by stephenkmacksd

Joe McGinniss wrote a best selling book on the Richard Nixon campaign, published in 1969. ‘The Selling of the President, 1968’.  In the ‘Age of Bloomberg’ an enterprising journalist should write a book about the 2020 Election, and its Plutocratic candidate Bloomberg, with the title ‘The Purchasing of the American Presidency’. Certainly no one at The Financial Times would author such an attack, on the hallowed institution of the vote! Except under a pseudonym?

Mr. Luce, being born in 1968 is probably not familiar with the McGinniss book? The unmasking of the Nixon public relations campaign was a valuable act of journalistic practice. Mr. Luce is safely moored in the ‘exceptional political present’ where history is defined by what happened in 2016, and perhaps no further, except when it is part of making an ideological point.

Mr. Luce’s opening paragraph is chock-a-block with the- should I have used the more pertinent term ‘political melodrama’?

Its onset has been visible for some time; such is the nature of slow-motion wrecks. Unfortunately we cannot press the fast-forward button. Wednesday night’s debate in Las Vegas was the Democratic party’s nastiest so far — with Michael Bloomberg its clear loser. At some point, nevertheless, the Democratic race is likely to boil down to a fight between him and Bernie Sanders. There are few ways that a zero-sum contest between a self-funded old billionaire and a stubborn old socialist could end in a friendly armistice. There are many in which the collision could play out. Almost none, barring the least likely — a sweeping victory by one over the other — entails a happy ending for Democrats.

First to entree stage -left is Sanders, burdened by Mr. Luce’s invidious comparison to Trump: just recall the Clinton coterie’s Bernie Bros. of 2016, its the Neo-Liberal Party Line. Mr. Luce is one of this myth’s ardent rhetorical allies. Add to the crimes of the Bernie Bros. they were disloyal to the institution of the Party! (Stalinism?)

The similarities between Mr Sanders’s campaign and Donald Trump’s in 2016 are apt. Each has militant supporters who are happy to indulge in social media harassment and character assassination. Barely half of Mr Sanders’ supporters would vote for Mr Bloomberg if he became the nominee, according to a recent poll. That share would almost certainly rise as the spectre of a Trump second term loomed. But Mr Trump would only need to capture a slice of the “Bernie Bro” constituency — the politically incorrect element of the US senator’s base — to tip the election his way. That is what happened in 2016. An estimated tenth of Mr Sanders’ supporters voted against Hillary Clinton.

The political melodrama reaches its second act with Sanders still the dramatis personae engaging in a ‘hostile takeover’ of the Democratic Party. Note the use of a metaphor used to describe the Corporate Raider, making concrete in the mind of the reader, that Sanders is illegitimate! Rather than a reform movement against the sclerotic, corrupt Clinton coterie: its representatives in Luce’s melodrama are Biden and Warren.

Mr Sanders is trying to do a Trump-like hostile takeover of the Democratic party. He enjoys similar tactical advantages. Like Mr Trump, Mr Sanders has benefited from a packed field of conventional candidates who have spent most of their firepower attacking each other. Wednesday’s debate was the most combustible example of that so far. Like Mr Trump at the same point in 2016, Mr Sanders is spurned by his party’s establishment. Nowadays that is taken as a virtue. A single Iowa legislator endorsed the senator from Vermont before the state’s caucus this month against double-digit endorsements for most of the others, including Joe Biden and Elizabeth Warren. Mr Sanders nevertheless won the most votes.

Not content with his unrealized melodrama, which is just an extended screed of Anti-Sanders cliches.

Finally, like the US president, Mr Sanders believes he is heading a movement, not a campaign. People who lead causes do not drop out. They fight to the bitter end.

All of which presents a looming dilemma for Democrats. Mr Sanders wants a revolution. Mr Bloomberg wants a restoration. The contours of one increasingly likely collision came at the end of Wednesday’s debate. Every candidate, barring Mr Sanders, said they would accept the rules of a brokered presidential convention. Mr Sanders alone insisted that the candidate with the most votes should be the nominee — even if they had less than half the delegates.

In another democracy, Mr Sanders would belong to a different party to the rest. Mr Bloomberg would too. The first calls himself a socialist. The second is essentially what used to be called a Rockefeller Republican.

In practice, Mr Sanders and the other candidates see New York’s former mayor as a plutocrat who bought the silence of sexually harassed former employees as well as his place on the Democratic stage. Mr Sanders, meanwhile, is seen as an ageing coronary patient whose extravagant promises would deliver Mr Trump a second term.

Mr. Luce’s melodrama disappoints because it descends into a predictable Anti-Sanders screed, garnished with the notion that plutocrat Bloomberg represents a ‘Political Restoration’. These last two sentences close his polemic …

The writer, Jorge Luis Borges, once likened the UK-Argentina war over the Falkland Islands to two bald men fighting over a comb. It would also serve as an apt forecast of a Bloomberg-Sanders showdown.

In reply to One thought
I watched the 1964 Republican Convention  on television, and vividly recall Rockefeller being booed when he made a speech to the convention.
Here is a link to a Politico’s ‘History Dept.’ that describes the all its melodramatic particulars, for readers in the 21st Century:

Headline; Nelson Rockefeller’s Last Stand The 1964 Republican National Convention and the fall of the party’s moderates.

This  marked the beginning of the generational purge of ‘Liberals’ from the Republican Party.
But the real monument to Rockefeller’s ‘Liberalism’ was his handling of Attica;

Headline: Rockefeller on the Attica Raid, From Boastful to Subdued
…

At the time, it appeared that State Police sharpshooters who had fired on the prison yard had killed mostly inmates, not some of the prison guards who had been held hostage inside. And because the inmates were black and the guards white, the governor and the president seemed to suggest, the American public would undoubtedly endorse the state’s assault on Attica.
“They did a fabulous job,” Rockefeller told Nixon. “It really was a beautiful operation.” In a follow-up conversation the next day, as grimmer details began to emerge about the assault, in which 29 inmates and 10 hostages were killed, a more subdued Rockefeller acknowledged that his initial boast about the sharpshooters’ precision was premature.
… 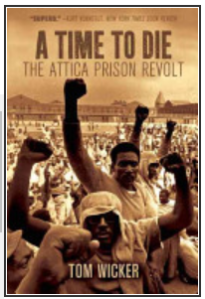