Stephen Budiansky and the toxic myth of the virtue of Oliver Wendell Holmes. American Writer comments

Posted on February 17, 2020 by stephenkmacksd

I saw a copy of this latest biography of Oliver Wendell Holmes by Stephen Budiansky, today, at my local library. I searched, out of curiosity, for the Buck vs. Bell case. This being a valid test of an actual biography of Holmes, warts and all, or just more of the same apologetics, for this misogynist and misanthrope, and one of the decisions that establishes without fail this American jurist’s reputation.

Here, from G. Edward White’s Oliver Wendell Holmes : Law and The Inner Self: 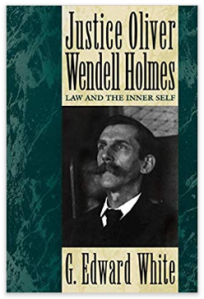 From pages 407 and 408 some telling information that has escaped Mr. Budiansky’s attention ?  That I recalled this portion of Prof. White’s biography can be attributed to the fact that Holmes was a very particular kind of American Monster!

The second feature of Buck v. Bell is that it concerned a legislative “reform” about which Holmes did not have his customary skepticism. On the contrary, he was an enthusiast for population control devices, particularly those that promised to reduce “incompetence” in the population. He had no reason to doubt many of the assumptions of the eugenic reformers: that mental disabilities were inherited; that mental disability was linked to crime; that the very persons who were candidates for sterilization were the least likely to control their sexual impulses. He had written Pollock in 1920 that “I should be glad . . . if it could be arranged that death should precede life by provisions for a selected race,” because “every society rests on the death of men,”(130) and that “[y]our remark that the men fit for military service on the whole are the better type . . . is precisely the reflection that makes me believe that it would be possible to breed a race.”(131)

He had written Laski in 1923 that “I do not regard the great multiplication of the species as a benefit.”(132) and in 1925 that “I don’t believe in millennia and still less in the possibility of attaining one . . . while propagation is free and we do all we can to keep the products, however bad, alive.”(133) He wrote Lewis Einstein in 1927, after the Buck decision, that “establishing the constitutionality of a law permitting the sterilization of imbeciles . . . gave me pleasure.”(134) And he wrote Laski that when he wrote the opinion in the Buck case he “felt that I was getting near to the first principle of real reform.”(135)

It therefore proves too much to associate Holmes’ opinion in Buck v. Bell with a skeptical tolerance for “social legislation” of all sorts, which does not capture his attitude toward Virginia’s sterilization statute. The notoriety of Buck v. Bell has increasingly cut into Holmes’ image as a civil libertarian; it played an important part in the first major revision of that image by critics in the 1960s.(136) The question remains, however, how that image first surfaced, given Holmes’ repeated skepticism about the efficacy of “progressive” legislation, indifference toward civil rights claims, disinclination to grant aliens any rights against the state, and ultrapositivist theories of sovereignty.

The Cult of Oliver Wendell Holmes is politically and civically toxic!  Mr. Budiansky is another Holmes acolyte.