On The French Political Melodrama episode DLVII: the gilets jaunes don’t seem to be going away! Almost Marx comments

Posted on January 6, 2019 by stephenkmacksd

As reported at RFI, the gilets jaunes as a political force does not seem to be ebbing : 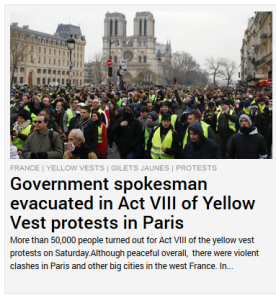 ‘More than 50,000 people turned out for Act VIII of the yellow vest protests on Saturday.Although peaceful overall,  there were violent clashes in Paris and other big cities in the west France. In Paris, a government spokesperson had to be evacuated from his offices.’

More at The Guardian: 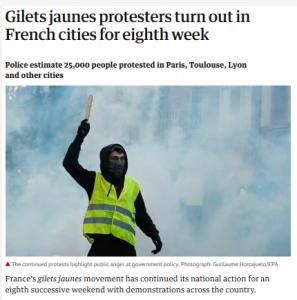 France’s gilets jaunes movement has continued its national action for an eighth successive weekend with demonstrations across the country.

In Paris, there were violent clashes between police and protesters attempting to reach the Assemblée Nationale, the lower house of parliament on Saturday. Riot police forced demonstrators back using teargas after coming under a hail of projectiles.

A restaurant boat on the Seine was set alight along with dozens of scooters and motorbikes.

On the Boulevard Saint Germain in the centre of Paris, tourists looked on as a group of protesters, most of whom were not wearing the eponymous yellow vests, blocked the street with a barricade made of rubbish bins, barriers and Christmas trees from a nearby market, which they set alight.

Macron and his political fellow traveler Benjamin Griveaux’s call for : He said Macron had called on ministers to be “more radical” in their attempt to reform the country. In sum , what is called for was defined by the Thatcherite Radicalism of Fillon. The labeling of Macron’s  Jupertarian Politics as a ‘centrist government’ when it is a Neo-Liberal government, only points to the utter lack of the credibility of this newspaper, while the Luke Harding/Manafort fraudulent reporting remains an unaddressed question!

Protesters have rejected concessions announced by Macron aimed at responding to public anger, prompting the government spokesman, Benjamin Griveaux, to accuse them of insurrection.

“The gilets jaunes movement for those who are still mobilised have become agitators who want insurrection and, basically, to overthrow the government,” Griveaux said.

“They have engaged in a political battle to contest the legitimacy of the government and president. These people who call for debate don’t want to take part in our national debate. I call on them to participate.”

He said Macron had called on ministers to be “more radical” in their attempt to reform the country.

Griveaux was evacuated from his office on Saturday afternoon after “several individuals” used a mechanical digger to break down the door. The government spokesman was taken out of a back door after the intruders reportedly smashed through a grille into the courtyard of an annex to the finance and economy ministry where he has his office.

Afterwards Griveaux said it was not a personal attack, but one on the republic. It is not known if the intruders are linked to the gilets jaunes movement.

The group has turned down the president’s invitation to take part in a national debate, due to begin this month, describing it as a “political trap”. In an open letter read outside Paris city hall on Saturday, they warned Macron: “Anger will turn into hate if from your pedestal, you and your like treat ordinary people like beggars, the toothless, those who are nothing.”

This is a direct reference to Macron’s televised new year message in which he targeted those who “claim to speak in the name of the people” but who are “nothing but the voice of a hate-crowd”.

The letter demanded a “significant reduction in all taxes on essential goods” and a reduction of the privileges enjoyed by high-ranking civil servants and elected representatives.

The gilets jaunes are also demanding the president name a “respectable person” to act as mediator.

“We come together, we can do better and we will do better. And, yes, we will go further,” the letter concluded.

The final three paragraphs of this news report outlines the demands of the gilets jaunes: the 36.5% of spoiled/uncountable ballots in the final vote in the French election, have finally manifested in the politics of the gilets jaunes. The only question that remains: will the dull-witted enarque Macron, and his henchman Griveaux, strike the match to ignite this powder cage?