Posted on September 2, 2020 by stephenkmacksd

Headline: Shinzo Abe and his struggle with Xi Jinping

The Party Line on Shinzo Abe has been enunciated by Gideon Rachman, weakly framed in New Cold War melodrama. The political cartoon that accompanies this essay is awash in ‘Manchurian Candidate’ hysterical political paranoia* : 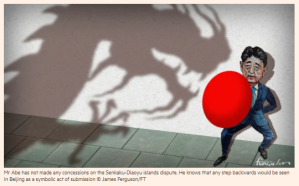 Not to forget the contribution by David Ignatius at The Washington Post:

Headline: Shinzo Abe was a better ally than we deserved

During a 2015 interview at his imposing office in Tokyo, Japanese Prime Minister Shinzo Abe expressed a humility that’s rare indeed among world leaders these days. “Politicians should be humble in the face of history,” he told me, referring to the suffering that Japan had caused Korea during World War II.

Thanks to that reticence, Abe was perhaps the world’s most successful leader in managing the erratic presidency of Donald Trump. He knew Japan’s security depended on having a good relationship with Washington, no matter who was in power. And he subtly coaxed and cajoled Trump toward sensible policies that were good for Japan, and America, too.

“Abe had a clear strategy for his country. Japan couldn’t succeed without the United States. It didn’t matter who the president was. He needed to work with whoever was elected,” said Michael Green, the top Asia expert in the George W. Bush administration and now a senior adviser at the Center for Strategic and International Studies. Green has been a friend of Abe for several decades and probably knows him as well as any American.

Headline: Shinzo Abe and the rise of Japanese nationalism

Sub-headline: As a new emperor takes the throne, prime minister Abe is consolidating his ultranationalist “beautiful Japan” project. But can he overcome a falling population and stagnating economy?

Guiding Japan through these challenges is its prime minister, Shinzo Abe. A strategic conservative, he is the heir to two powerful political dynasties: his father was a former foreign minister, his paternal grandfather an MP, and his great-uncle one of the longest-serving prime ministers. But the most conspicuous ornament in the family tree is his maternal grandfather, Nobusuke Kishi, who ran the brutal conscript labour system in Japanese-occupied Manchuria. Held for war crimes, he was released before trial in 1948 and eventually became prime minister, calling – unsuccessfully – for revision of the constitution and the expansion of Japan’s military capabilities.

Shinzo Abe lacks the social skills of his extrovert grandfather, whom he lauds in speeches. Indeed, when Abe took power in 2012, few expected him to last long or accomplish much. They had seen him in the role before, in 2006, when he held on for less than a year before resigning in the face of gaffes, money scandals and parliamentary election losses, and while suffering from poor health.

His second attempt, however, revealed a newfound sense of perseverance: Abe is set to become the country’s longest-serving prime minister.

Distinguishing his first stint from his second is “Abenomics”, a powerful economic salvo that was to jolt the Japanese economy back to life. The combination of monetary easing, fiscal stimulus and structural reform aimed to lift inflation to 2 per cent and produce a virtuous cycle of business expansion and consumer spending. But instead, the economy performed a dead cat bounce: a small recovery, then nothing. The effect on the national debt has been far greater. It now stands at an eyewatering 250 per cent of GDP. A long-planned sales tax hike, meant to pay for the huge borrowing, is likely to be delayed again in fear it will drag the fragile economy back into recession.

Unlike Abe’s last tenure, when he chose to visit China on his first overseas diplomatic trip and lifted bilateral relations out of the deep freeze caused by his predecessor Junichiro Koizumi’s annual visits to the Yasukuni Shrine, Abe’s first trip overseas will be to the US this time.

“Abe chose to visit the US first because he hopes the military clout of its ally can help deter China,” Ni noted.

The US Congress passed Friday the National Defense Authorization Act for fiscal 2013, reaffirming that the islands were subject to the Japan-US security treaty.

The bill shows the US has “made the most explicit determination to take the side of Japan in this evolving dispute,” Vijay Prashad, professor of International Studies at the Connecticut-based Trinity College, told the Global Times.

Chinese foreign ministry spokesperson Hua Chunying slammed the bill Sunday, saying the Japan-US security treaty, as “a bilateral arrangement in a special historical time,” should neither harm the interests of any third parties, including China, nor be involved in any foreign territorial disputes.

Mr. Rachman’s concluding paragraphs are indicative of what a Neo-Liberal finds of inestimable value: ‘a free and open Indo-Pacific’ : a place holder for the collapsed ‘Free Market Mythology’ !

At the same time, Mr Abe has cultivated new friends — in particular, Narendra Modi, the prime minister of India. Japan is promoting a “free and open Indo-Pacific”, in which the region’s democracies work together. The implied contrast is with a closed and authoritarian Asia-Pacific that might emerge if Chinese power is uncontested.

Mr Abe has made many of the right strategic moves for his country. But he leaves office without knowing whether his efforts will ultimately be crowned with success. Responding to the rise of China is a generational challenge for Japan. Mr Abe’s successors will need luck, as well as skill, to navigate an uncertain future.

*Menand spends too much space, on the utterly bankrupt belief that Lee Harvey Oswald killed President Kennedy. Its as if ,the assistant counsel for the Warren Commission, Arlen Specter’s ‘Magic Bullet Theory’ retained its status as crucial evidence of Oswald’s guilt. Or that The Church Committee findings were studiously ignored. The ‘guilt of Oswald’ was once the measure of bourgeois political respectability. Menand still tows the Party Line on this question!