The reader of Mr. Rachman’s latest essay is first confronted by an editorial cartoon, depicting the American Eagle and an Indian Tiger, both noble and resolute, facing off with a demonic red  Chinese Dragon, with smoke coming from its nostrils. This cartoon, a readers guide as to the content of the essay. Call this the crudest kind of propaganda! 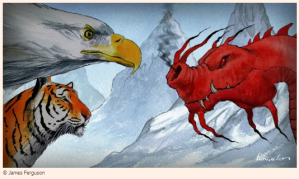 Mr. Rachman’s essay on the China/India ‘clashes’ is steeped in an ersatz political psychologism, attributing emotions to state entities and  its politicians, technocrats, anonymous and named, its  citizens, reduced to a carefully chosen few. Doesn’t just express lazy thinking, but demonstrates an absence of that more than valuable asset:

Mr. Rachman provides a link to a Financial Times report:

Sub-headline: New Delhi likely to boost US relations and reduce reliance on commerce with neighbour

It takes three ‘reporters‘ to produce this one news story?

Mr. Rachman role in this essay is focus on the Strategic, rather than any other consideration, if not to further the New Cold War, in its Asian iteration. In sum, Modi’s Hindu Fundamentalism, and its record of the murder of fellow Muslim Indian citizens, by Modi’s mobs of political acolytes, needs to be put in the background, of  a more pressing issues of a Strategy, steeped in a New Cold War Ethos: a moral/political obscenity.

All four nations are intensely concerned by the balance of power in the Indo-Pacific region. It is folly for China to drive India into America’s arms.