…
Liberalism is not just a set of rules. There’s a spirit to it. A spirit that believes that there are whole spheres of human life that lie beyond ideology — friendship, art, love, sex, scholarship, family. A spirit that seeks not to impose orthodoxy but to open up the possibilities of the human mind and soul. A spirit that seeks moral clarity but understands that this is very hard, that life and history are complex, and it is this complexity that a truly liberal society seeks to understand if it wants to advance. It is a spirit that deals with an argument — and not a person — and that counters that argument with logic, not abuse. It’s a spirit that allows for various ideas to clash and evolve, and treats citizens as equal, regardless of their race, rather than insisting on equity for designated racial groups. It’s a spirit that delights sometimes in being wrong because it offers an opportunity to figure out what’s right. And it’s generous, humorous, and graceful in its love of argument and debate. It gives you space to think and reflect and deliberate. Twitter, of course, is the antithesis of all this — and its mercy-free, moblike qualities when combined with a moral panic are, quite frankly, terrifying.

“We are not afraid to entrust the American people with unpleasant facts, foreign ideas, alien philosophies, and competitive values,” President Kennedy once said. “For a nation that is afraid to let its people judge the truth and falsehood in an open market is a nation that is afraid of its people.” Let’s keep that market open. Let’s not be intimidated by those who want it closed.

With his jejunely expressed  ‘faith’ in Liberalism, garnished with his conception  ‘soul’ , this not a ‘Liberal’ concept, but a theological one. He is grafting this concept onto his ‘Liberalism’: his disingenuous re-write.

Aided by a quote from President Kennedy, framed in market terms. Kennedy the voice of reason, from another time in America. The idolatry of the martyr expresses Andy’s Catholic sensibility, allied to his own status as victim.

Yet there is this record of Andy’s War Mongering, expressed as an ersatz mea culpa :

Sub-headline: The case for conservative multiculturalism

On the question of the history of ‘Liberalism’, and what defines it, Domenico Losurdo offers his Counter History: 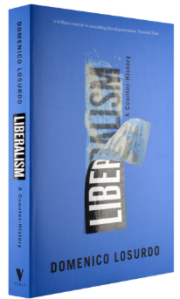