Posted on September 21, 2019 by stephenkmacksd

When reliable Inquisitor Andy Divine isn’t making holy war against Middlebury College, he likes to keep busy. See this valuable essay from The National Review by Andrew Stutterford of March 11, 2017, that takes Andy’s New York Magazine essay on the Charles Murray/Middlebury controversy.  Note that Andy, as editor of The New Republic, published on October 31, 1994, this essay by Charles Murray and Richard J. Herrnstein titled Race, Genes and I.Q. — An Apologia, The case for conservative multiculturalism, so his political investment in Murray is of long standing.

Andy’s cultivated ignorance of American institutional, academic racism, brazenly expressed by his publication of this excerpt, that caused an open rebellion of the staff writers of this magazine, remains beyond the ken of this scribbler! Mr. Stutterford offers an ally to Andy in William Deresiewicz in The American Scholar ‘ form writing more explicitly from the left’ provides some Conservative perspective?

Unmentioned is the hysterical intervention of ‘The Coddling of the American Mind’ that was published, in its essay form, in The Atlantic of September 2015:

Recall that old saw ‘idle hands are the devil’s workshop’? I know that I must have heard this many times in Sunday School, at Youth Night and Vacation Bible School! Andy’s latest encyclical provides clear evidence that Andy, like the good Catholic, is a dedicated even hysterical exponent of the continuing project of Inquisition.

A long descriptive passage of the University of Chicago Press web site provides some needed context for Andy’s mania,  with its introduction to Karen Sullivan’s ‘The Inner Lives of Medieval Inquisitors‘:

There have been numerous studies in recent decades of the medieval inquisitions, most emphasizing larger social and political circumstances and neglecting the role of the inquisitors themselves. In this volume, Karen Sullivan sheds much-needed light on these individuals and reveals that they had choices—both the choice of whether to play a part in the orthodox repression of heresy and, more frequently, the choice of whether to approach heretics with zeal or with charity.

In successive chapters on key figures in the Middle Ages—Bernard of Clairvaux, Dominic Guzmán, Conrad of Marburg, Peter of Verona, Bernard Gui, Bernard Délicieux, and Nicholas Eymerich—Sullivan shows that it is possible to discern each inquisitor making personal, moral choices as to what course of action he would take. All medieval clerics recognized that the church should first attempt to correct heretics through repeated admonitions and that, if these admonitions failed, it should then move toward excluding them from society. Yet more charitable clerics preferred to wait for conversion, while zealous clerics preferred not to delay too long before sending heretics to the stake. By considering not the external prosecution of heretics during the Middles Ages, but the internal motivations of the preachers and inquisitors who pursued them, as represented in their writings and in those of their peers, The Inner Lives of Medieval Inquisitors explores how it is that the most idealistic of purposes can lead to the justification of such dark ends.

Unlike some of these men , Andy doesn’t believe or practice All medieval clerics recognized that the church should first attempt to correct heretics through repeated admonitions… his first resort is to engage in an unremitting public shaming of those deviationists. It’s the rhetorical formula of choice for Andy, and his vilification of his identified apostates, that seek to find new ways of conceiving, thinking, behaving toward other persons, in and out of their care, both personal and civic: Andy can’t let go of his Patriarchal Attitudes, to use Eva Figes book title as descriptor.That we all share a common civic/political destiny is again beyond Andy’s ken!

And is the appearance of those dreaded ‘French Philosophers’ a surprise? Those evil ‘Marxist Post-Modernists’ the reliable straw-men of New World Intellectual Hick Jordan Peterson. The political ghosts of these thinkers/writers are a fabled repository of mendacious error. These reliable bad actors, a function of New World intellectual xenophobes!

One of the key aspects about social-justice theory is that it’s completely unfalsifiable (as well as unreadable); it’s a closed circle that refers only to itself and its own categories. (For a searing take down of this huge academic con, check out Douglas Murray’s superb new book, The Madness of Crowds.) The forces involved — “white supremacy,” “patriarchy,” “heterosexism” — are all invisible to the naked eye, like the Holy Spirit. Their philosophical origins — an attempt by structuralist French philosophers to rescue what was left of Marxism in the 1960s and 1970s — are generally obscured in any practical context. Like religion, you cannot prove any of its doctrines empirically, but children are being forced into believing them anyway. This is hard, of course, as this teacher explains: “I’m trying. I am. But you know how the saying goes: You can lead a White male to anti-racism, but you can’t make him think.”

Andy is given to verbosity, I have skipped over much of his rambling, as just that. Let me recommend three books on French Philosophy and French Theory: 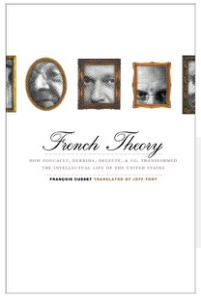