Posted on June 8, 2019 by stephenkmacksd 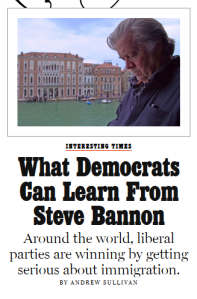 A well educated, white male immigrant to America, Andy Divine declares
‘What Democrats Can Learn From Steve Bannon’ in his latest encyclical. ‘Those Immigrants’ were/are the products of US Wars of Empire in the Eastern Hemisphere , Afghanistan, Iraq. In sum, at least 8 Fronts on The War On Terror, that we know of!  And  the active subversion , even wars, against the ‘Reform Movements’ in the  Western Hemisphere, in the many states south of America’s porous border. Don’t mention Andy’s enthusiastic support for these wars, expressed in this collection of his rhetorical interventions, on behalf of American murderous political adventurism based upon lies!

What is America’s record on treating the Braceros, Mexican Migrant Workers that picked fruit and vegetables from  1942 to 1964, as guest workers during WWII, and after? America still owes these workers $500 million, the debt to these workers has increased since the original claims were filed. America has yet to pay them, hoping that time eliminates their claims, as the workers who brought those claims are dying from old age, still waiting for American fair play!

Andy cultivates his historical ignorance of the plight of these workers, while he wrestles with the insights, that racist Steve Bannon can offer the Democrats. This ,sure to be welcome to Hillary Clinton and Joe Biden, whose animus to the lesser beings of the planet are well documented?

Here is the core political wisdom of Bannon, as presented by Andy as a conjecture, with the added garnish, in the following paragraph, with his perpetual hysterical Anti-Leftism:’stridently leftist cultural stances’ :

Think of how popular Trump would be now if he had done what Bannon advised: raised taxes on the superrich, lowered them for the middle classes, started the wall, ended mass immigration, and fought a trade war with China.

All of this framed by Andy’s political moralizing chatter,  about the coming apocalypse of the Nation State, in sum, the destiny of the American Nation State? His rhetoric steeped in Huntington’s Anti- Mestizo hysterics of  ‘Who Are We?: The Challenges to America’s National Identity’ , while  ‘we’ are  mired in the good intentions, of the less enlightened, but well meaning of an ‘honorable’ citizenry.

Andy presents himself as the representative of the Vital Center of the political spectrum, while Europe is engulphed in  the surge of the Populist Right. It escapes Andy’s attention that we are fully engulphed politically, in that toxic Populism. While the front runner of the New Democrats Joe Biden is the leading candidate, whose racism was codified in his notorious Crime Bill.