Dizzy Old Queen Andy Divine comments on the Teresa May resignation, and his prediction that Posh Boy dull-wit Boris Johnson , will succeed her is …… Political Observer comments 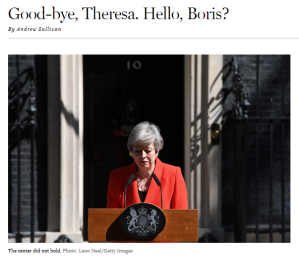 The melodramatic headline for this picture should scream: Tory Bitch Cries Real Tears, For Herself!

Poor Andy can’t even pretend to any sympathy for this incompetent. Even David Cameron managed the usual  “she’s a dedicated public servant”. The last paragraph of Andy’s latest essay is predicated upon his status as an objective observer of the British, the EU, the rise of the right, in what was once called Eastern European politics, and India. Andy’s historical/political sweep is …

If you want to know why neo-fascism is resurgent in Europe, this is why. The European project overreached, and has never recovered from the financial crisis a decade ago. Europeans have always been more attached to their own national identities than to some abstract edifice like the E.U. This has been compounded, as it has in the U.S., by elite contempt for the feelings of ordinary people, denial about elite failure over the last two decades, and an inability of those elites even to speak a language most people can understand. I’d vote against those elites too, if I were Italian or Greek. Their comeuppance cometh. What comes after is the metastasizing problem.

Political scribbler Andy began his career with a youthful infatuation for Mrs. Thatcher, then on to Neo-Conservatism, and then to an idiosyncratic Neo-Liberalism. But Andy has since transcended those  jejune categories, and has become a Political/Moral Prophet. An idiosyncratic egoist and self-promoter, whose prediction: ‘My bet is that Boris Johnson will be prime minister by midsummer.’ is destined to be utterly forgotten by that point in time. By that time Andy will have found a new object of infatuation.