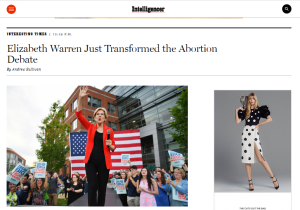 Elizabeth Warren is not afraid. Today, she set out a proposal to integrate Roe v. Wade’s provisions for access to abortion into federal law. She even framed her proposal this way: Congress Can Protect Choice. And she’s right. Congress can legislate on abortion; the matter can be settled through politics, rather than through a strained parsing of the Constitution by the courts. Political arguments can be made, and countered. Voters can go to the polls to support candidates who will vote for such a law, which will make any previous Supreme Court ruling irrelevant.

But never fear Andy demonstrates that like those Male, punitively Hetero-Evangelicals, he is one of the ultimate arbiters of  a ‘self-congratulatory morality’ that puts politicians like Warren in her place.The last paragraph establishes his ‘holier than thou’ status wrapped in moralizing hypocrisy.

I say this as someone deeply committed to the view that abortion is always a grave evil. I could not personally have anything to do with one. But I live in a pluralist society, I will never have to be involved in such a deeply personal decision, and I am equally dedicated to respecting the sincere convictions of my fellow citizens, and their unalienable right to sovereignty over their own bodies. If we take this issue away from a court whose decision still divides the country after 46 years, we can actually come to some compromise on it, like every other democracy. It would once again be possible to make your case, with full and immediate accountability — either for legal abortion or against it, or for a reasonable middle. Roe could be replaced by a federal law — perhaps like the one proposed today by Warren — or state laws of varying degrees of control. What we desperately need to do is take this issue out of the polarizing abstractions and into the nitty and the gritty of democratic give and take.

And whatever side you’re on, have mercy.

Like the male legislators who passed – they in effect outlawed or severely redistricted  abortion- don’t have a uterus, nor any of the other reproductive organs to conceive, nor to carry a fetus to term. So none of the male legislators, nor Mr. Divine, will ever face an actual  choice, that any women in her child bearing years will potentially face! Yet the moral arrogance of these men rules the lives of more than half of the American population. Kant’s ‘self-emancipation from tutelage’ comes to mind. Yet there is a more simplistic answer : no uterus, no vote!