At The Financial Times: Kurt Campbell reviews’Our Man: Richard Holbrooke and the End of the American Century’, by George Packer. American Writer comments

The Asia Group LLC (TAG) is a strategy and capital advisory group based in Washington DC with an affiliated office in Hong Kong.[1]The firm was founded in 2013 by Dr. Kurt Campbell, the former Assistant Secretary of State for East Asian and Pacific Affairs and Nirav Patel, former Deputy Assistant Secretary of State for Strategy and Multilateral Affairs.

Here are some telling excerpts from Mr. Campbell’s near swooning ‘review’ of Our Man: Richard Holbrooke and the End of the American Century, by George Packer. Mr. Campbell is a member of the The Club! Call it what? self-serving literary/political kitsch?

In many ways this book is also a collective portrait of that generation who came of age during the Vietnam war. This terrifically talented and fantastically flawed cohort of men come to life in these pages, and Packer makes painfully clear that in some ways they would never fully escape the jungles of south-east Asia. The betrayals, hubris, massive military mistakes and, perhaps most of all, the intense drama of their youthful encounters in Vietnam, would mark their later years.

Decades later, during Holbrooke’s dark moments of indecision in the diplomacy over the Balkans before his historic 1995 Dayton peace agreement, and in his desperate ruminations a decade later over a way out of Afghanistan, Vietnam was always lurking.

This book is a complex rendering of a complicated man. Depending on your perspective, his was a life either of diplomatic daring and achievement marred by a few disappointing episodes, or a life of narcissistic excess interrupted intermittently by a few good deeds.

In an elegant and thoroughly accessible fashion, Packer has taken pains to tell Holbrooke’s story fully and fairly. He was constantly scheming and manoeuvring for perceived advantage but he used those traits to negotiate the end to Europe’s most vexing conflict; he could shamelessly court those more powerful but then take a stand on a matter of principle; he neglected family but was a fabulous mentor to a new generation of foreign policy practitioners. For Holbrooke, Packer’s honest renditions of his indiscretions, betrayals, and lapses in judgment would be wounding but ultimately excused. It is, however, Packer’s ultimate rendering of Holbrooke’s legacy that he would regard as fatal. In the end, Holbrooke was almost great.

Even the mildly curious reader could, without much effort, find this review of Mr. Packer’s book by Thomas Meaney at the New Republic website:

Headline: The Canonization of Richard Holbrooke

Sub-headline: Why Third Way liberals saw a glamorous, difficult diplomat as the protector of their values

The first two paragraphs are telling in terms of the attempt at political/moral rehabilitation of the bumptious Mr. Holbrooke.

If anyone questioned the sureness of Richard Holbrooke’s media touch during his lifetime—when he was persona very grata on cable news shows, dated Diane Sawyer, and set-designed the Dayton Accords on a remote U.S. air base to dramatize the inconvenient necessity of American power—the fact that George Packer has produced a 600-page portrait of him should lay to rest any doubt. Not every diplomat of the second-tier receives full biographical treatment, much less from one of the most beloved journalists in the country

Perhaps this book originated out of some sense of obligation. After Holbrooke’s death in 2010, a group of his friends wantedsomeone to write his life. Already the author of a New Yorker profile of Holbrooke, Packer was the obvious candidate. Holbrooke’s widow entrusted him with a massive trove of Holbrooke’s personal papers and audio aide-mémoire. Less clear is what was in it for Packer. In order to get a long biography off the ground, he would need to make his subject embody something larger. If the mission was to re-quicken the country’s lost appetite for humanitarian intervention and liberal internationalism, Holbrooke was a promising vessel. Who better represented the more noble side of American power, on display during the golden years between, in Packer’s exacting periodization, “Cold War sobriety and the celebrity shitbox”?

For the patient reader the next paragraph puts Mr. Campbell’s ‘review’ in its place: an wan attempt at hagiography!

Of course, Holbrooke could be belligerent, obtuse, and impatient: “Is he one of those guys you have to sit around and drink tea with for hours?” he complains about a Saudi go-between at one point in this book. “Holbrooke put his feet up anywhere,” Packer writes, “in the White House, on other people’s desks and coffee tables—for relief, and for advantage.” But liberal legend had it that he had solved the riddle of the Balkan Peninsula through the sheer force of his personality, and might have done the same in Afghanistan if only he’d lived long enough, or if his ego hadn’t tripped up his talents. In these dark times, with America’s global prestige apparently in ruins, surely we would rally to have him on our side. The “our man” of Packer’s title is in this sense not tip-of-the-hat-to-Graham Greene ironic, but elegiac and vaguely defiant.

Thomas Meaney , provides this, that is key to the an understanding of Holbrooke’s character:

Born in New York City in 1941, Holbrooke came from a Jewish middle-class liberal background, much like Packer’s own. (In Holbrooke’s case, the fact that his parents were Jewish refugees from Hitler’s Europe was kept from him until adolescence, and he downplayed it until late in life, when he suddenly “became Jewish” on the eve of his ambassadorship to Germany.)

In terms of Holbrooke Melodrama: who can forget the golden boy of nepotism, Ronan Farrow’s pitiable claim, ‘He Was the Closest Thing to a Father I Had’? In the American Political Gossip Sheet Politico. 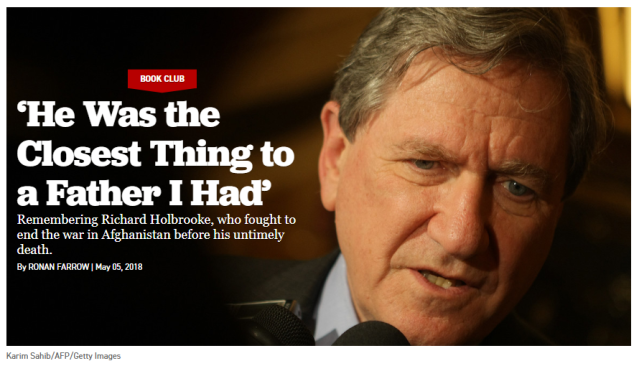