Posted on December 23, 2018 by stephenkmacksd 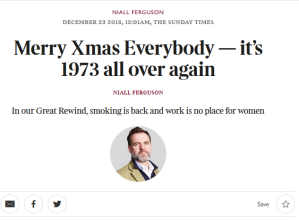 From the Versailles Grand Dining Room of the Hoover Institution, comes this compelling readable  Year End Roundup from the Niall Ferguson, some irresistible  highlights, the first is ,well , a nonpareil of the trivial, yet signifies one of the many symptoms of ‘The Great Degeneration’ !

One highlight of 2018 was the story of the Dutchman who wanted an age change. Born on March 11, 1949, Emile Ratelband was perfectly content with that day and month. It was just the year he proposed to alter — from 1949 to 1969. “We live in a time when you can change your name and change your gender,” Ratelband argued. “Why can’t I decide my own age?” He was even willing to give up his pension if the Dutch courts would recognise his desire to identify as a middle-aged man, rather than an old one. Of course, being Dutch, the judge said no.

The attack on Elizabeth Warren is, what to say, predictable, she is to the ‘Conservative Political Sensibility’ an Apostate !

If only Ratelband had been born in the United States, he would surely have had more luck. For most of her academic career, Senator Elizabeth Warren claimed to be of Native American origin. Had she not made the mistake of taking a DNA test, she might one day have been hailed as the first Cherokee president.

Also utterly unsurprising is his attack on Chelsea Manning:

From December 1987 until August 2013, Bradley Manning was a male American. The day after Manning was sentenced to 35 years in prison for espionage, however, his lawyer announced that his client was in fact female. My mentioning that for 25 years Manning was a bloke called Brad will doubtless lead transgender activists to accuse me of “deadnaming”.

For Mr. Ferguson’s animus toward what might be called Sexual Non-Conformists see this essay by Nick Cohen:

Headline: More Niallism: Keynes opposed Versailles because he was a screaming queen

The final two paragraphs of Mr. Cohn’s essay are telling:

If I were a conservative, I would worry. We’ve had rampant Niallism these past few years. Britain and the Eurozone’s austerity policies sound good in a pub argument, but have not worked so well – or indeed at all – in the world beyond the saloon bar. In America, the Republicans went off with the Fergusonesque Tea Party and lost. Now British Conservatives are appeasing Ukip.

They should be careful. Many people who might have given them a hearing will walk away if they carry on like this. They will say of them, as Keynes said of the Conservatives of his day, ‘They offer me neither food nor drink — intellectual nor spiritual consolation… [Conservatism] leads nowhere; it satisfies no ideal; it conforms to no intellectual standard, it is not safe, or calculated to preserve from the spoilers that degree of civilisation which we have already attained.’

Mr. Ferguson can’t let go of his ‘sexual/gender’ obsessions as the signs of ‘Degeneration’!

Last week it was reported that Brighton and Hove city council had issued new guidance to teachers advising that “menstruation must be inclusive of all genders” because “trans boys and men and non-binary people may have periods”. If we are to believe that menstruation is now a matter of personal choice, then why not age, too?

The reader can explore the remaining  parts of this hysterical polemic for themselves! One reviewer of Kenneth Anger’s ‘Hollywood Babylon’ compared the book to a box of poisoned bon-bons.