On the decline of America’s Public Women & Men. Publius comments

No need to wonder or even agonize over the men leading our once Republic. Mueller, Comey, Brennan, Clapper are the dregs of now vanished Republic, swallowed whole by the imperatives of the National Security State. If you need a reminder of how bankrupt these men are read Comey’s tweet here:

Mr. Comey, like his predecessor J. Edgar Hoover,  is a paranoid political hysteric with a sense of mission, and once possessed a malign power. He now poses as a beacon of moral/political virtue, in the Age of Trump: the Authoritarian Personality is  true, the reader need only pay attention to the unhinged political discourse of the present . Look to the Margaret Kimberley tweet on the porcine Dowager Empress of ‘The Resistance’  Hillary Clinton: 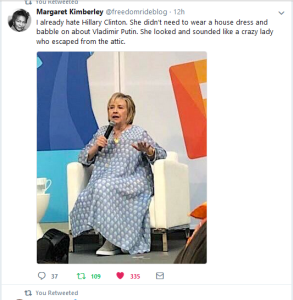