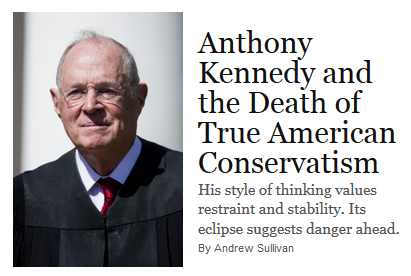 The retirement of Anthony Kennedy is an obituary for conservatism in America.

Kennedy’s pragmatic libertarianism — his belief in limited government, pluralism, moderation, and social cohesion — didn’t fit into either of our two political tribes’ worldview. He favored marriage equality but also the religious freedom of fundamentalists; he opposed racial preferences but found a way to accommodate some version of affirmative action; he believed in free markets but saw a role for government in preventing climate change; he sided with the conservatives on the court much of the time (including in his final term) but defended the habeas corpus rights of Gitmo prisoners, ended the death penalty for the mentally ill and minors, protected the right to burn the flag, and when push came to shove, defended Roe. For all this, he frustrated a lot of people, in both tribes. Many Republicans loathed what his rulings meant for gay equality, affirmative action, abortion, and his refusal to be an Antonin Scalia clone. They mocked his rhetoric for its highfalutin vagueness. Many Democrats expressed their contempt for him as he left, decried his consistent federalism, and simply couldn’t grasp how a social moderate could also favor defending the rights of fundamentalists unfairly treated by the state government or of big money in politics because of the First Amendment.

In sum Kennedy was the exemplar of how Mr. Divine conceives ‘Conservatism’ . But in fact Divine’s apologetic is awash in the praise of what Kennedy was, the swing vote on a Supreme Court colonized by Neo-Confederate/Originalists. Who was a de facto member of that quartet, when it suited him.

The historical watershed of Brown I and II is the very genesis of The Federalist Society’s and its ‘Strict Constructionists’ as successor to the Dixiecrats, not to speak of the White Citizens Council. The quartet of Roberts, Alito, Thomas and Gorsuch are, if not members of this organization, they share it in its racial and political hysterics .  Mr. Divine’s belief in the natural inferiority of black people, his enthusiasm for ‘The Bell Curve’ is unabated . Where does all this place Thomas?  Indeed a vexing question yet to be fathomed or even comprehended.

Kennedy and his ‘Citizens United’  decision maladroitly  orchestrated by Roberts to protect his reputation,  took the legal fiction of corporate personhood from its status as a  pragmatic  legal definition to an existential fact., that embraced the notion that money now enjoys a special political status. Further evidence of the Neo-Confederate/Originalist Quartet  had a reliable fellow traveler in Kennedy. This is the evidence of the  Plantation Mentality of this coterie.

Look to the latests Supreme Court  decision on Trump’s Muslim Ban , that took the opportunity to white -wash its obvious Islamaphobia by the overturning the utterly notorious Korematsu decision with this:

… “whatever rhetorical advantage the dissent may see in doing so, Korematsu has nothing to do with this case,” …

Mr. Divines praise for Kennedy  is a nearly bottomless well, framed as always by his copious  narcissism, aided by telling quotes and references to his political allies. Rhetorical brevity and concision are not virtues that Mr. Divine believes in nor practices, he favors the tedious political meander as demonstrative of his gasp of the political present: he is our self-appointed Platonic Guardian.