I’ve only read one of Vargas Llosa books ‘The Temptation of the Impossible Victor Hugo and Les Misérables’ published in English translation in 2007 by Princeton University Press. 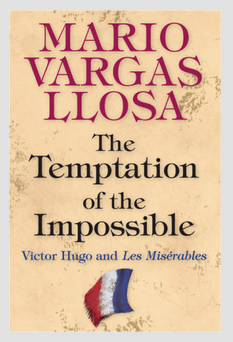 I had read the Penguin paperback of Les Misérables , and found Vargas Llosa commentary and tribute to Hugo’s book worthy of the time it took to read and think about this classic of World Literature. At least until reading Tim Park’s essay, in The London Review of Books, titled ‘Thunderstruck’ a review of The Novel of the Century: The Extraordinary Adventure of ‘Les Misérables’ by David Bellos. This paragraph of Park’s essay demonstrates that Hugo and  Vargas Llosa share an oligarchic sympathy against the ‘Left’ outlook, if not practice :

And on another, of reversal. Elected to the National Assembly after the collapse of the monarchy in 1848, Hugo found himself at the centre of things when Parisian workers rebelled against the new government’s decision to introduce conscription for the unemployed and threw up barricades across the city in response. Though at this point he was claiming that the future lay with the people, Hugo first agreed to visit the barricades and demand they be dismantled, then, when the rebels wouldn’t obey, exceeded his brief by ordering the National Guard to open fire. For three tumultuous days and at great personal risk, Hugo, unasked, led government attacks on the barricades. ‘He was a dutiful man,’ Bellos remarks. Hugo’s biographer Graham Robb puts it more brutally. ‘This means that [Hugo] was directly responsible for the deaths of untold numbers of workers.’

The above quotation from the Park’s review confirms the evidence of the Hugo and Vargas Llosa  political propinquity:

There, during the Margaret Thatcher years, he re-forged his political compass, reading deeply Adam Smith, Friedrich Hayek and Isaiah Berlin. Such classic liberalism, even among fans of his fiction, often jars in a part of the world where leftist views are still taken as a badge of intellectual honour.

Mr. Rathbone assures his readership that Vargas Llosa’s status as disillusioned ‘Leftist’, and his conversion to Thatcherite is mitigated by : ‘nor is he quite a standard-bearer for the conservative right either.’  In sum, Vargas Llosa is a Neo-Liberal, but with decidedly oligarchical political sympathies. As evidence of his status :

On 4 February 2011, Vargas Llosa was raised into the Spanish nobility by King Juan Carlos I with the hereditary title of Marqués de Vargas Llosa (English: Marquis of Vargas Llosa).[97][98]

Vargas Llosa joined the Mont Pelerin Society in 2014.[101] He is also a member of Washington D.C. based think tank, the Inter-American Dialogue.[102]

He was named in the Panama Papers released by the International Consortium of Investigative Journalists on 10 May 2016.

Mr. Rathbone writes an eminently readable essay, on his lunch with one of a completely vanishing species, the Man of Letters. And the portrait of  Vargas Llosa drawn by Mr. Rathbone is winning, yet a question remains, where might be the Women of Letters be in the present dismal age of Neo-Liberal Collapse? A question not to be answered in the pages of this newspaper? In Conservative Letters, what we in America have is the rickety old Dandy, as imagined by Walt Disney, Tom Wolf. Gore Vidal remains the model for the American Man of Letters, as yet to be matched, by any writer male of female.Capote, Mailer and Vidal were once ubiquitous figures on the American scene, not to speak of Arthur Miller, Tennessee Williams, Susan Sontag, Mary McCarthy, Lillian Hellman.

Television is the preferred medium of choice for the gaggle of Think Tank propagandists, that corrupt the public discourse, with their never ending, but vacuous chatter, that defines the Centrism of the political present: the alliance between the Neo-Liberals and the Neo-Conservatives.