I just have to wonder at this whole political melodrama that stars the notorious grifter Donald Trump and his prosecutors, two former FBI hacks Mueller and Comey. Based on the word of Hillary Clinton, and her political coterie,  without an examination of their servers or computers, by the FBI, to confirm the ‘Russian Hacks’. Would not that be the first step in a criminal investigation into such a serious crime against America’s political process?

Ken Starr on the Whitewater investigation into President Bill Clinton.  …

Also consider this quote from Comey:

“A person who sees moral equivalence in Charlottesville, who talks about and treats women like they’re pieces of meat, who lies constantly about matters big and small and insists the American people believe it, that person’s not fit to be president of the United States,” he said.

He offers a moral indictment of Trump, not a legal one. The FBI, and its former directors,  have never demonstrated moral behavior, except as cover for their own lawlessness! Is it a surprise that Trump is by even the vaguest of definitions a crook,  a misogynist and even a racist? Nixon was all of these, yet he was forced from office, in the face of incontrovertible evidence of his ‘high crimes and misdemeanors’ not moral unfitness!

What of Obama’s de facto pardoning of CIA Torturers, and the State sponsored murder of US citizens? Not to speak of the expansion of The War on Terror and the triumph of Technocratic Murder By Drone!

Where is the evidence of direct collusion between Russia and the Trump campaign ? Or of Trump himself -there is plenty of corrupt sideshow, as if that were a surprise!And its attendant political hysterics, provided by the Clinton coterie of New Cold Warriors, with the Putin/Trump fictional alliance as its central political conceit.

The tweets of Trump, versus the moralizing earnestness of Comey, offer more of the same tired political melodrama: that is the engine of corporate media. The  problem is that this political show is engineered for the black and white 21 inch screen of 1952. Or even more pointedly , Hillary as Pauline in ‘The Perils of Pauline’ tied to those railroad tracks, as that train fast approaches, and the villain chuckles and twists his handlebar mustache.

Thank you for your comment. Google translate word phrasing equals Russian troll. Mr.Rosenstein is a Special Council, if not in name, at least in the exercise of his duties, acting in the role Sessions should had played, had he not recused himself. The whole affair is a legal muddle, or ‘Through The Looking Glass’, where corruption of all kinds reigns.

‘Classic whataboutism with Obama and Hillary’ :

@reader this is the point were you play Mrs. Malaprop? (note question mark!)

And finally this maladroit summation of my polemical style :

lots of exclamation points at the end of sentences! Lots of words, good when you are paid by the word.

@reader I count three exclamation points!(note, exclamation point).  And the fact that the  word count of my comments is linked to my pay, as a Russian troll! (note exclamation point) Not since the salad days of Holmes, has a master of deductive reasoning of your caliber shined such a bright light on Russian skulduggery! 😉

Quite eloquently argued, almost a model of its kind, until: ‘What a sad fate for the country that led the liberal democratic world during the cold war.’ The very people you inveigh against are reviving the Cold War, and its central villain Putin, to bring about the Neo-Con/Neo-Liberal political alliance’s reason d’etre: war with Russia! Read Bret Stephens at the New York Times or Wm. Kristol at ‘The Weekly Standard’. Or Anne Marie Slaughter, an occasional contributor to the newspaper .

Thank you for your comment. The narrative of Stalin’s ‘expansionism’ was really related to the Yalta Agreement, that Roosevelt, Stalin and Churchill agreed to.  Recall ‘Spheres of Influence’ ? The Republicans after the War dubbed The New Deal ‘a Generation of Treason’, Yalta being  one of that argument’s component parts, along with the loss of China: Eastern Europe was the victim of Roosevelt’s political surrender to Stalin’s demands. So goes that narrative. Some consider that narrative contested territory .

Others take the argumentative line, that Eisenhower withdrew his troops too early from those former theaters of war, therefore emboldening the imperialist Stalin.

That  Generation of Treason narrative was used by the Nixon/Mundt/McCarren/McCarthy political axis to engage in a Witch Hunt, an American tradition dating from  WWI and the Palmer Raids. The Red Scare after the Russian Revolution of 1917 led to The Alien and Sedition Act.  And The Salem Witch Trials presided over by Cotton Mather ,and his use of ‘spectral evidence’ was also one of the historical antecedents of the American search for apostates.

Who caused the old Cold War, it takes two to tango, to use a cliche. But it is surly the Neo-Cons and their Neo-Liberal allies, meaning The New Democrats i.e. Mrs. Clinton and her coterie, that are hysterically bellicose. The names of those Neo-Cons  I’ve already mentioned.

Mr. Murray, thank you for your comment, and your attempt at faint praise. It’s heartening to know, that I have at least one reader at this publication, who almost understands me! If that isn’t too Sally Field of me?

‘The so-called “heroes” riding to the rescue are a fiction generated by the televised “news” media for advertising revenue purposes.’ Mr. Murray direct your attention to the newspaper you are reading! @FT is presenting both Comey and Mueller as the heroes of this utterly shoddy American political melodrama, with grifter Trump as the Villain. Its ‘Journalistic Red Meat’ for the apologists for the failed Neo-Liberalism that helped usher Trump into the Oval Office, with the help of the execrable New Democratic candidate Mrs. Clinton.

San Diego CA USA area is full of former military types and similar political right-wingers. How does Mr. Mack fit in there?

Mr. Murray thinks/imagines that San Diego is the Dodge City of Gunsmoke, by the sea! With those military types and political right-wingers strapped, meaning gun slingers looking for trouble. All that is missing from this is the dusty dirt main street, where the confrontation between me and those ruffians is about to take place!

It is awash in black and white television cliché, to say the least. How do I fit in here? My bad judgement, that became good, allied to an opportunity to move to a place where it is beautiful all year long, even when it isn’t. California was the destination for my mother’s family, and my dad and his half-brother rode the rails to the Golden State during the latter years of the Depression. 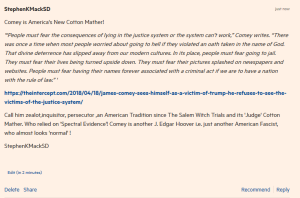 ‘“People must fear the consequences of lying in the justice system or the system can’t work,” Comey writes. “There was once a time when most people worried about going to hell if they violated an oath taken in the name of God. That divine deterrence has slipped away from our modern cultures. In its place, people must fear going to jail. They must fear their lives being turned upside down. They must fear their pictures splashed on newspapers and websites. People must fear having their names forever associated with a criminal act if we are to have a nation with the rule of law.”

Call him zealot,inquisitor, persecutor ,an American Tradition since The Salem Witch Trials and its ‘Judge’ Cotton Mather. Who relied on ‘Spectral Evidence’! Comey is another J. Edgar Hoover i.e. just another American Fascist, who almost looks ‘normal’ !