Posted on June 1, 2019 by stephenkmacksd

Andy Divine is or was an enthusiast for the Bell Curve and the Iraq War, and sundry other forms of political/moral nihilism. But the indefatigable Andy ,in his latest encyclical, instructs the reader about what ‘Real Conservatism’ looks like. His examples of Conservative Virtue are former FBI Director Robert Mueller and Congressman Justin Amash.

This Is What a Real Conservative Looks Like in 2019

This week, two eminent Republicans did something quite novel in 2019. They committed conservatism. By conservatism, I mean a philosophy of limited, constitutional government, individual rights, trust in tradition, love of country, prudence in foreign policy and restraint at home. Restraint means not doing something that you could. It means conceding the right of your opponents to run the country for a while — for the sake of the common good. It means admitting that sometimes you’re wrong. It means give as well as take. It often means compromise.

This excerpt is almost comic, if weren’t for the fact that an apology, for his enthusiasm for the War on Iraq, and the hundreds of thousands of dead and displaced cannot be taken back. It is part of Andy’s self-congratulatory rhetorical amnesia, the very cornerstone of his polemic:

It means conceding the right of your opponents to run the country for a while — for the sake of the common good. It means admitting that sometimes you’re wrong. It means give as well as take. It often means compromise.

Mueller record of political conformity and opportunism is easy to map: On the War on Iraq:

On February 11, 2003, one month before the U.S.-led invasion of Iraq, Mueller gave testimony to the Senate Select Committee on Intelligence. Mueller informed the American public that “[s]even countries designated as state sponsors of terrorism—Iran, Iraq, Syria, Sudan, Libya, Cuba, and North Korea—remain active in the United States and continue to support terrorist groups that have targeted Americans. As Director Tenet has pointed out, Secretary Powell presented evidence last week that Baghdad has failed to disarm its weapons of mass destruction, willfully attempting to evade and deceive the international community. Our particular concern is that Saddam Hussein may supply terrorists with biological, chemical or radiological material.”[43][44] Highlighting this worry in February 2003, FBI Special Agent Coleen Rowley wrote an open letter to Mueller in which she warned that “the bureau will [not] be able to stem the flood of terrorism that will likely head our way in the wake of an attack on Iraq”[45][46] and encouraged Mueller to “share [her concerns] with the President and Attorney General.”[46]

On the FBI Crime Lab scandal: Mueller was head of the FBI from on September 4, 2001 so he was an integral part of the active cover-up that the FBI engaged in. Tainting Evidence : Behind the Scandals at the FBI Crime Lab which was published on June 2, 1998. Justice delayed is Justice denied! 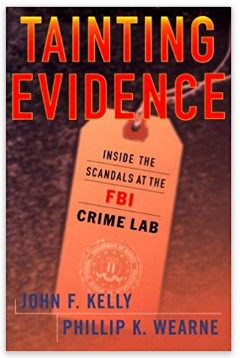 And this report on the FBI Crime Scandal and the failures of other labs:

Headline: CSI Is a Lie

Forty years ago, Bob Dylan reacted to the conviction of an innocent man by singing that he couldn’t help but feel ashamed “to live in a land where justice is a game.” Over the ensuing decades, the criminal-justice system has improved in many significant ways. But shame is still an appropriate response to it, as the Washington Post made clear Saturday in an article that begins with a punch to the gut: “Nearly every examiner in an elite FBI forensic unit gave flawed testimony in almost all trials in which they offered evidence against criminal defendants over more than a two-decade period before 2000,” the newspaper reported, adding that “the cases include those of 32 defendants sentenced to death.”

The article notes that the admissions from the FBI and Department of Justice “confirm long-suspected problems with subjective, pattern-based forensic techniques—like hair and bite-mark comparisons—that have contributed to wrongful convictions in more than one-quarter of 329 DNA-exoneration cases since 1989.”

That link points back to 2012 coverage of problems with FBI forensic analysis, but the existence of shoddy forensics has been so clear for so long in so many different state and local jurisdictions that the following conclusion is difficult to avoid: Neither police agencies nor prosecutors are willing to call for the sorts of reforms that would prevent many innocents from being wrongfully convicted and imprisoned, and neither the Republican nor the Democratic Party will force their hands.

The desperation of the Midwives of Trump, poor Andy among them , to find heroes like Mueller and Comey ,from one of the most corrupt and authoritarian institutions of the American National Security State, should not surprise. Andy adopts a self-serving ahistoricism at will.

Andy’s enthusiasm for Representative Amish is about his bravery in advocating the impeachment of Trump, in defiance of the Republican Party Line.