Posted on September 24, 2018 by stephenkmacksd

Don’t look for the usual performances from the sclerotic male Republicans on the Committee on the Judiciary? They will either be very careful with Prof. Ford, or let their obvious misogyny rule their questioning. Are these men so without perceptual abilities to know that women will be paying careful attention to the  ‘how’ and the ‘style’ of  their  method of their  inquiry. And that the Mid-term elections are just weeks away?  Is this the time for caution and political pragmatism?

Also follow Feinstein’s performance,who refused to let other New Democrats on the committee view the Ford letter. Will she act the part of inquisitor? probably not, but it is not beyond possibility, she is a member in good standing of the Senate Boys Club! Feinstein’s candidacy  faces insurgents in the coming November election: Alison Hartson, Kevin de León, Pat Harris from within the California Democratic Party.

Feinstein failed to get the endorsement of the California Party, she must not create the impression that she is hostile to another woman!

A look at the gender imbalance on the committee is predictably dominated by the ubiquitous sclerotic white male, of both Parties ! 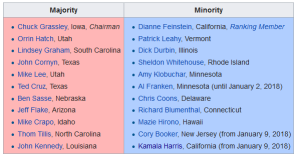 P.S. What of the roles that Senators Hirono and Harris can play in this unfolding political melodrama? Set this against the background of Trump’s penchant for tweeting his  nihilism/opportunism, as some kind of legitimate political practice of a game show host.

Brett Kavanaugh, US president Donald Trump’s nominee for the Supreme Court, has again been accused of sexual misconduct, in a dramatic development only four days before the Senate holds a high-stakes hearing into an earlier allegation of attempted sexual assault.
The New Yorker magazine on Sunday reported that Deborah Ramirez, a woman who attended Yale University at the same time as Mr Kavanaugh, had accused the appeals court judge of inappropriate behaviour in their first year at college. The new allegation puts a fresh obstacle in the way of the attempt by Mr Trump and the Republicans to shift the court to the right.
Ms Ramirez’s decision to go public with the allegations came after the Senate Judiciary Committee had reached a deal with Christine Blasey Ford, a California professor who has accused Mr Kavanaugh of an attempted sexual assault, to appear before the committee on the same day that he will testify before the panel about the allegations. Mr Kavanaugh has denied the accusations.
https://www.ft.com/content/ae2027f4-bf48-11e8-95b1-d36dfef1b89a